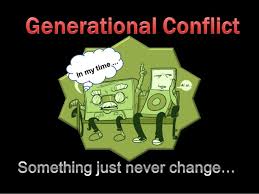 Last week I had an interesting conversation with one of my friends, Mark, regarding the gulf between the generations. He has run an engineering company here in Adelaide for the past twenty years, and in my opinion, as long as I have known him has been a fair and just employer, He employs a range of age groups from apprentices to mature people.

He posed the question to me “What will it take for some consensus between the generations?” I laughed out loud. “Mark if I had the answer to that I would be currently lounging on a sunbed in Tahiti, sipping Pina Coladas.”

He told me about his growing frustration comes from investing time and money to create a culture of collaboration between his staff and not being able to see tangible and lasting results.

Even though I have been engaged in teaching and writing on generation change for the past decade, I am not sure I came up with a clearly defined answer. Although I did proffer some theories I hold, which might provide some reasons

They might be considered somewhat controversial; nevertheless, this is what I believe!

Let’s be clear we have experienced conflict between the generations since time immemorial, so what is new?

In terms of change, this has to be one of the most momentous times the world has ever witnessed, the speed and frequency have been unprecedented, causing disruption on a massive scale. The younger generations have welcomed this with arms while my age group ( am 67), has difficulty in accepting the changes.

At the heart of the issue is the introduction of new technology and how we communicate with each other. Traditional methods have been set aside as the demise of face to face contact has been substantially reduced by digital communication. Platforms now exist for the dissemination of information to every part of the globe, no matter what position a person may hold in his or her society.

History would seem to reveal the seat of authority and power has always come from tradition, wealth, age recognition and the capture of knowledge by a limited part of the population.

It has fundamentally changed with today the individual being able to access information and data never before being available to them. These individuals range from the very young to many others across the spectrum furthermore giving them the ability to express their own opinions.

The following generations after the Baby Boomers are probably the most educated to come on the scene; we have ever known although there is much conjecture regarding the limitation of their people skills.

It is here where the battleground is being set and played out. Unfortunately, the Baby Boomers (my generation) know full well their authority is diminishing, under threat and refuse to retreat from their various positions. What seems to exacerbate the situation is we stand accused of making fundamental decisions that have broken trust and compromised the futures of the next generation.

Rather than collaborate, many are choosing to stick to their belief that the status quo should be maintained. The same principles should be applied to life, as in the past. In my opinion, pure folly and the long run futile.

On the other side, criticism can be aimed at the younger generations who put forth some idealist ideas, which are unworkable solutions to the challenges that confront us. A plethora of uninformed opinions litter the landscape, which is unhelpful. Expectations are incredibly high; they can be Impatient and unable to recognise some change will take time.

In the current environment, neither side will allow the other to express opinions that do not coincide with theirs, making any consensus impossible.

For good measure, we can add a very feral media who delight in stoking the fires of discontent, who have no intent to resolve this impasse only to further their selfish ends.

I have a lot of admiration for people like Mark and others who try to nurture consensus but not unlike the rest of the world we are caught in a web ( excuse the pun) which in the short term looks very unlikely to be resolved.

As discussed with my friend Mark, I hope my prediction is incorrect, and somehow we can find solutions to end this damaging conflict, but the immediate future looks bleak in terms of easing the tension between the two sides.

The next opportunity for some relief from this impasse may come in 2023 when a large proportion of baby boomers commence retirement and step down from leadership positions. Still, it is more likely we will see a more significant change at the end of the decade in 2030.

This will be when the following generations assume control and hold the seats of power. One has to hope they can fashion an environment where collaboration is a priority. They have a huge task in front of them.

So is it possible to reduce the shrill shrieks of division, I sincerely doubt it can be reduced at a national or even a global level any time soon; currently we are in freefall, in fact, the gap continues to widen.