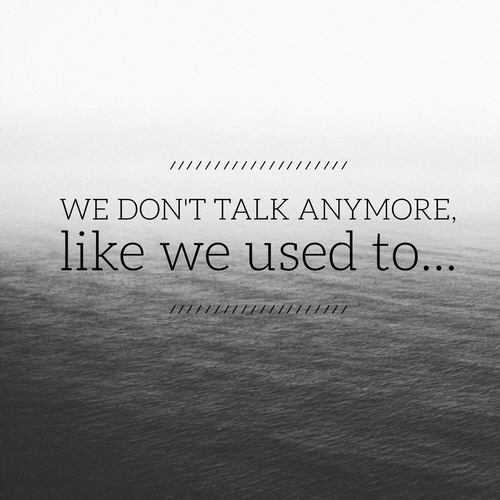 Almost one year ago a young American pop singer called Charlie Puth penned a song called” We don’t talk anymore “which could actually describe how our relationships have evolved. To be perfectly honest it’s perhaps it’s a bit of a misnomer because today we communicate more than any time in our history.

The difference being is how we talk to each other, switching from face to face interaction to a technical solution such as digital/mobile technology.

The dawn of the digital age has brought with it incredible advances in science and technology which could never have been envisaged previously. These changes have completely changed our landscape but we seem to have paid a price in terms of the social equilibrium and dialogue.

Apart from the effects of disruption which is proving rather painful, we are now experiencing around the world a much more serious issue: this is a drop in human interaction in real time.

Obviously, the ease and accessibility of the technology are an attractive proposition for people of all ages but the change in society has meant that issues requiring the human element have taken a dramatic drop with a result of many unresolved issues being pushed to one side.

I think most of us understand these changes have no prospect of being reversed in fact we will continue to see more technology advances into the future. We should be under no illusion that this is a fundamental issue that we should give more credence as it strikes at the very heart of how we live.

The key to the future will be how we can balance the use of the technology but still maintain face to face communication. It could be claimed our desire to avoid critical conversations is at the heart of a growing list of problems we are experiencing today.

Evidence of such a change can be found in classrooms, universities, business and life, in general, we have retreated behind our screens or other devices at the expense of having real life conversations that need to had.

The application of the new tools in our society has coincided with the ability of people to express themselves more freely. The cornerstone of many democracies is to maintain freedom of expression but like most things, there is a price to pay and it appears with the development of our modern communication platforms we seem unable to create boundaries. The result is free for all, where a myriad of expressions is canvassed not necessarily based on facts but unsubstantiated opinions, this has enviably lead to the type of disharmony we commonly see in our everyday lives.

The unfortunate ability of certain forces applying manipulation to our thoughts forces regarding s creating uncertainty and inertia in our decision processes is today a hallmark. A very powerful and sometimes malevolent media has gained an ever growing platform to influence people, being in the name of transparency and claiming the public having the right to know the truth. This has certainly been at the expense of balanced debate.
Of course, there are genuine reasons why issues are brought to the fore but it has gone beyond that and there are many examples where information has been abused to make headline news which has later been proved to be false and erroneous.

I have genuine reasons for raising this subject due to what I am seeing in my business.

It revolves around people, coaching, mentoring and general problem-solving. I meet a lot of people from different walks of life and in a career of stretching over35 years, I can honestly say I have never witnessed such a wide range of disturbing interactions. Examples of this being business people who feel frustrated in dealing with their people’s expectations. Career concerns expressed by graduates. Individuals suffering alarming drops in self- confidence, lack of respect for people in authority, feeling of helplessness and a distinct loss of motivation.

Many of my interactions reveal that their respective problems are the result of not having what the author Susan Scott in her best seller “Fierce Conversations”. These cannot be achieved by the use of email or text, face to face contact is essential.

We cannot click our fingers or tap our heels and our world will return to some kind of normality as we once knew it. It is far more complicated than that. The introduction of such change cannot be reversed but perhaps we can strike a better balance between innovation and tradition methods of communication, our modern society today needs both methodologies.

My rationale for this statement is that in my experience when people talk to one another much better outcomes can be attained.