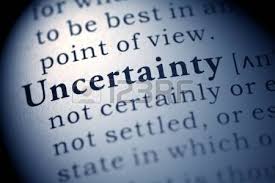 One of the unique aspects of life is the issue of certainty, in truth, there is no such thing except as the old adage goes only death and taxes.How often have people reflected on their lives and marvelled from where they started until their current position.

But it is evident life has dramatically altered, that is the level of change we are encountering is outstripping anything we have seen before and is creating havoc throughout, not only in our workplaces but also in wider society.

What was once considered as the natural order is being questioned, brought about by a series of changes and events, technological and social behaviours coupled with other global matters which have had a huge effect how we live and operate today.

At the heart of these changes has been the unfortunate collapse of the issue of trust between organisations and their people. The reasons for this situation are extremely complex, including economics, politics, conflicting societies and looming generational change are just some of the factors.

In the business world, we have seen substantial action in investing in Leadership and Development for its executive management teams in an attempt to revive trust in their organisations. Whilst commendable, recent evidence suggests the battle to achieve higher levels appears to have stalled with recent figures revealing on 37% of the people interviews have trust in their CEO’s. (Source: Hootsuite)

One must have a degree of sympathy for organisations as the results do not reflect the degree of other influences which affect respondent answers.Sadly due to a series of other factors, the standing and creditability of leaders have taken a very large “hit” in the eyes of people. This has meant difficulties in communicating important factual information. Whereas previously senior management addressing groups of employees could expect to receive a fair hearing, the responses tend to be rather lukewarm and fail to motivate.

An alternative approach to this extremely worrying situation has been to charge middle managers with the task of delivering messages to employees. The feedback from this change in strategy has seen a degree of frustration due being so called “the meat in the sandwich” and lack of personal development in order to be able to complete such tasks. Claims also include their demand as a result of time pressures.

So the question can be legitimately asked: “Why is it not working”?

My personal observations surround the issue of individuality of people today, a growing need being to address their specific issues and not be treated as one of a number.The old annual employee performance meeting is dead and buried and should be consigned to the waste bin, it is not effective or appropriate today.

Whilst making that statement I fully understand the implication on an organisation’s time and resources and can only be achieved by adopting a step by step plan to ensure coverage of everyone in their place of work. This not a call to end in our attempts to increase trust rather consider taking a different approach.

My other observation whilst somewhat controversial this strategy will have limited appeal to the Baby Boomer generation ( of which I am one) who believe in a more group mentality although some forward thinking organisations have adopted this strategy, with encouraging results. The imminent retirement of this generation scheduled to take place in 2023 may be a catalyst to significant change.

Again I can only recount my recent and historical experiences meeting and talking to people face to face can you get an in-depth insight into how they feel about their issues surrounding their work and lives. Whilst reassurance in its self is not the total answer it gives an opportunity for expression which is an essential element how people want to be treated. Trust is not something that you invent, unless we can develop trust our relationships will always breed uncertainty.

I used to chastise myself for holding such views and many have challenged my thoughts over the years calling it “Soft.” I am now rock solid in my belief that this approach is one of the only ways to break this impasse we find ourselves embroiled in.

Regarding wherever technology leads us the human element can never die, perhaps we need to stand back and take a moment to recognise that undisputable truth.